As 2016 turned to 2017, I reflected on the past year as I always do, and I thought of how much I learned and accomplished that hadn’t even entered my mind as a possibility a year earlier - rock climbing, ultrarunning, backpacking, attending a running camp with a bunch of women I’d never met. It made me wonder what 2017 would bring. What hadn’t I considered yet as a goal or opportunity to learn and begin something new? Sailing? Career change? New race distance? It occurred to me that the way to find new hobbies and joys is to simply say yes. Yes to adventure. Yes to being a beginner. Yes to feeling vulnerable. Yes to challenging tasks. Yes to some risk. Yes to the discomfort zone. Yes to unwavering support of those who have also chosen to say yes.

So I suppose it’s not surprising that I said yes to the women of Oiselle and the idea to take on The Speed Project, before I even knew any details beyond “an all-women ultra relay team with film crew March 10-12.” I deeply respect my instincts, and my instincts told me that this was a once-in-a-lifetime sort of opportunity to be part of something big. Say yes to adventure.

Once I found out the details of the race (or as many details as were available about this underground and slightly rogue event), I didn’t waver in my commitment to it. Despite my lack of experience with long relays like Ragnar or Hood to Coast, I had confidence in my overall strength and fitness, and I was intrigued about how that would translate into a rugged desert setting over multiple days. Say yes to being a beginner.

As the logistics started to come together for what was dubbed Bird Strike, I wondered how well we’d get to know each other over email, and what that would mean for our weekend together. I had met a couple of the women in the group, and interacted with several of them on social media, but for the most part this would be a completely new experience with an unknown team dynamic - like Bird Camp on steroids (and in an RV…). I relied heavily on my trust in Oiselle as a company and as a team, and I chose to believe that a group of women who are connected to Oiselle and who share a love of running would be able to mesh, even under the toughest of conditions. Say yes to feeling vulnerable.

My vulnerability extended into my feelings about the race format as well. I knew I could run 50 miles at once, and I knew I could run 53 miles over two days, but I didn’t know how my body would handle 55-60 miles or more in shorter increments over two days with minimal sleep. What if I couldn’t figure out my refueling and hydration, and I ended up getting sick or weak or both? What if my legs became unbearably heavy and tired? As it turned out, I didn’t do a great job of refueling and on-the-run hydration on the first day, which created some gastrointestinal woes over the first night. But I paid close attention to my body and its signals, I gave it what it needed (including the most delicious Cup Noodles I’ve ever tasted) and didn’t give it what it didn’t need, and luckily I rebounded on the second day. And as it turned out, my legs did become unbearably heavy and tired. But I kept moving because my team kept moving, and because we came to run, to race, to win. Say yes to challenging tasks.

In addition to being nervous beforehand about how my body would respond to the race format, I was also terrified of getting bitten by a rattlesnake in the desert. And after a vague mention at the pre-race meeting of the possibility of cops asking us questions while running, I was a little unsure of how I’d react to that scenario. Luckily I didn’t encounter any snakes, and my chat with a highway patrolman on Death Valley Highway was very cordial! Say yes to some risk.

As the second day of the race wore on, the total exhaustion from the combination of miles, Death Valley heat, and lack of sleep started to overtake my body and mind. This was no ordinary discomfort; this was serious doubt that I could keep moving. If I had been in a solo race and feeling so distraught, I might have considered dropping out. But this wasn’t my race. In every moment of doubt that I could take another step, I reminded myself that in that moment my role on the team was to make it one more mile up the hill, or two more miles in the heat, or any more I could muster. The more miles I could string together, the longer my teammates would be able to rest. The faster I could run once the sun went down, the wider our lead would be and the sooner we would finish (and sleep!). Still, it’s easier said than done, and in those final hours of the race, my teammate Nora Bird was critical to my confidence (and my mental stability) as she repeated, “You can do this. You can do it. We’re almost there. You can do this.” Say yes to the discomfort zone.

Nora’s encouragement was just one example of the uplifting nature of the experience. We didn’t just have the support of each other in the vans and the RV; we felt the love from everyone who showed their support via Twitter, Instagram, text messages, etc. Every time I saw an encouraging comment from a fellow Oiselle Volée member, I remembered that I was truly lucky to be in that RV in the desert, and that I was there as part of something larger than myself. Every time I heard a Bird Strike teammate say “I can do one more mile” or “I’ll go two more miles,” my respect and admiration grew exponentially, and each instance inspired me to keep pushing my own limits for them in return. Every time a crew member (or even a film crew member!) said “What do you need?” or “I’ll bike with you on this leg,” I was reminded that selflessness and gratitude are the values I cherish the most in others, and I checked my own attitude and behavior for chances to be a better person as a whole, even as my body and mind were deteriorating. Say yes to unwavering support of those who have also chosen to say yes. 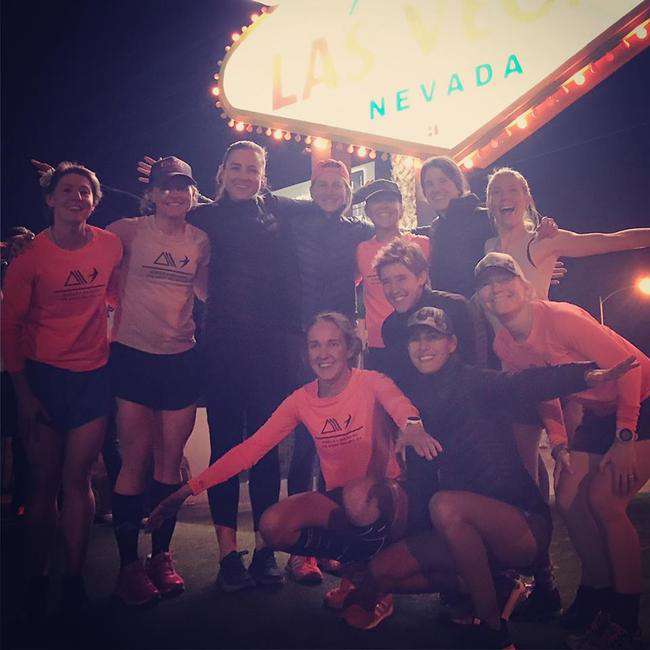 I am overwhelmed by this experience. While I’ve tried to describe it and capture its meaning here, it’s almost ineffable as a whole. I’m grateful to Oiselle for the idea, the belief in the team, and the support to make it all come to fruition; to Polartec for the fabric that performed so well in the desert, and for their support as well; to the team and crew, whom I am honored and humbled to call teammates and friends; and to everyone who followed the journey and cheered along the way. We’re capable of so much more than we realize, and sometimes it takes an unexpected opportunity to show us how much we can achieve. Be ready to say yes.

It was Monday evening after Thanksgiving 2017, and I was leaving work later than I wanted, heading to the parking garage in that light gray dusk of pre-winter. I was planning a short trip to the climbing gym, fully reveling in a break... Continue →