This post was inspired by a poem from Lauren Fleshman. 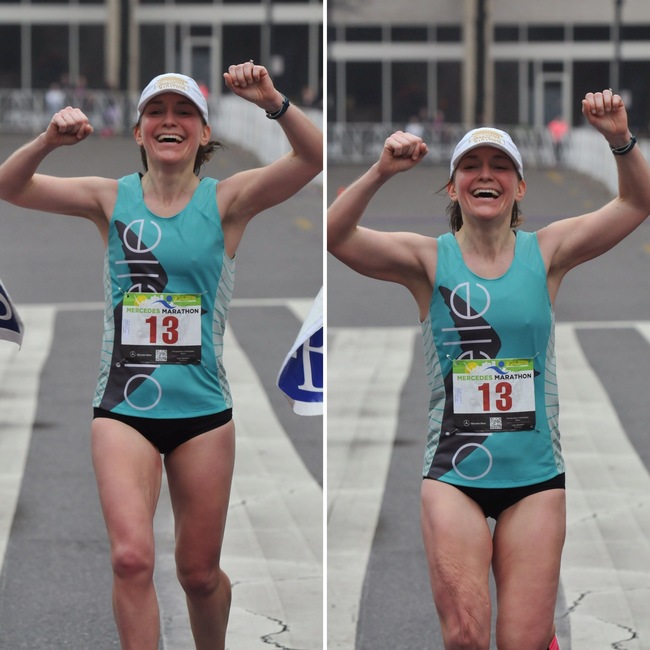 These two photos were taken a split-second apart.

The first captures my body as it was lifted off the ground by my left leg. You can’t see my feet in the photo, but I can guarantee (based on the knowledge gained from years of critiquing every photo of myself from every race I’ve run) that the toe of my left shoe is just barely touching the ground. Maybe it’s even lost contact with the ground, giving the impression that I’m floating. Certainly my spirit was floating in that moment. I don’t know if you can tell, but I had just broken the finisher’s tape when the photo was taken. It was the first time I’d won a marathon, and it was also my fastest marathon by about four minutes. I share this photo all the time. The race was in February 2015, but I’m still so very proud of this moment and all the hard work that went into it.

The second photo (again, literally a split-second after the first) captures the other end of the running motion – the force of a 120-pound body hitting the ground, with my right leg catching it, stabilizing it, and getting ready to propel it forward again; the quadriceps of my left leg relaxed and softened, as the hamstring works to reload for the next step; the skin, loose muscle, and fat of my arms hanging a bit as I relax them to bring them back down to my sides. This is also a photo of me winning a marathon, but I never share it. I saved it, mostly because I paid a freakin’ lot of money for the entire set of digital photos from this race, but also because it is a reminder of the moment that happened next, and a reminder of the almost 32 years that brought me to that moment.

After I crossed the finish line, I overheard a spectator say, “Doesn’t even look like a real runner. Kind of flabby.” In the moment, I was elated enough from my victory and new PR that I let the comment roll off my back. I thought, “Whatever. I just ran a 2:52 marathon and WON it.” But that comment noodled its way into my brain and became a part of me, along with every comment ever made by strangers or family – cover your arms; suck in your stomach; she’s chunky for a kindergartner; she’ll probably end up overweight…

I’ve struggled with body image for as long as I can remember. For a while, in my early twenties, it took up so much space in my brain that it affected my relationship with food. Luckily, over the last 10 years, with the help of role models like Lauren Fleshman and Stephanie Bruce and the raw openness and honesty of my Oiselle Volée teammates, I’ve been able to slowly retrain my brain to see my body differently – not as a thing covered in fat with bone and muscle inside, and not as a measure of my value to the world; but instead, as a carrier for my heart and lungs, the worldly embodiment of my spirit, this great machine that enables me to run marathons and walk the dogs and rock climb and hike and hug my nieces and kiss my husband. It’s a daily practice, some days harder than others, to drown out negative thoughts with positive ones, but I’m working on it. My body is something I want to maintain, to keep healthy, to fuel and recover and mend and strain and sweat and rest. I pledge to respect it, to not be ashamed of it, and to never ever talk shit about it. Join me?

I have a confession: I can be a whiny wimp about running in poor weather conditions. Temps in the 90s, plus humidity? I’ll probably whine about it. Wind, with or without precipitation? I will most likely shed actual tears. Oh, and hail?... Continue →